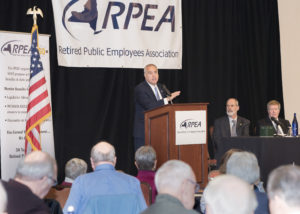 With New York state Comptroller Tom DiNapoli’s announcement that the state’s retirement fund will get to net-zero emissions by 2040, the Times Union noted an important point (“State fund to divest from oil,” Dec. 10): “the retirement fund’s purpose and fiduciary responsibility is to protect the pensions of the 1.1 million retirees and active public sector workers who depend on it.” This needs to be reinforced.

The comptroller is the sole trustee of the pension fund. It is his legal and fiduciary responsibility to administer it for the benefit of current and future retirees.

The Retired Public Employees Association, which represents the interests of nearly 500,000 public service retirees, has opposed legislation that would pre-empt the comptroller’s constitutional role and authority by requiring divestiture of fossil fuel investments thereby infringing on his authority as the fund’s sole trustee. During the last legislative session, in place of the Legislature’s pursuing such measures, the comptroller and lawmakers agreed that the pension fund will be transitioned to a portfolio that reflects net-zero greenhouse gas emissions by 2040. This is a victory for both government retirees and climate risk.

The fund’s investments have earned strong returns. It continues to be recognized for this. In 2020, the Pew Charitable Trusts ranked it the second best-funded pension fund in the nation. This has happened with the comptroller as sole trustee for all this time.

To read the LTE on the Albany Times Union website, visit: www.timesunion.com/opinion/article/Letter-DiNapoli-s-Leadership-a-Victory-for-15853030.php

Following Unanimous Votes in Each House, it is Time to Urge Governor Hochul to Sign…